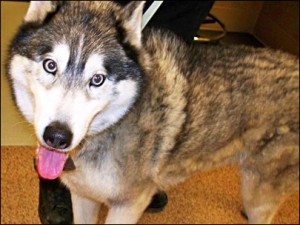 As founding father Papa Murphy recognized, one of the core American freedoms is the liberty to enjoy a hot pepperoni pizza without being ambushed by packs of wild dogs. But one Salem, OR family had their god-given right to a slice cruelly infringed upon Wednesday, when a loose Siberian husky jumped in their car and stole a delicious, hand-tossed dinner.

Around 3pm, the unnamed family returned home by car after picking up what must have been a totally bomb pepperoni pizza, only to be greeted by a strange and ravenous dog. The dog then jumped into their back seat and immediately began to devour the meal like the greedy little pizza bandit he was, “barking aggressively” whenever anyone approached him or his cheesy plunder.

Eventually, both police and animal control arrived, and were able to coax the animal out of the car, whose only identification was a collar reading (not kidding) “Don’t mess with my food.” After a short stay at the county animal shelter, the husky (evidently named “Eysak”) was then handed over to his owners, despite their clear inability to provide their dog with the whole pizzas he so desperately needed.

But because this truly is the land of the free, this story has a happy ending, as a WINCO store manager has offered to replace the pizza. Assuming, of course, the family can get it home without getting pizza-jacked by a rabid malamute gang.