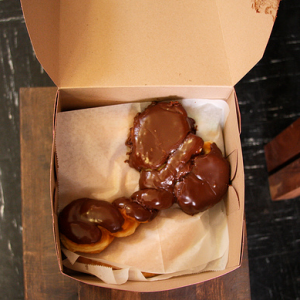 If you’ve ever met a middle school administrator, you know the one thing they hate more than scootboards and the hippity-hop is any dong-related speech not coming from a gym coach holding a condom and a banana. Which makes a Voodoo Doughnuts employee’s recent error during a career day presentation all the more surprising, given that pretty much the only rule of junior high is “don’t say wang.”

While talking to students at Molalla River Middle School on Thursday, the unnamed doughnuteer apparently failed to properly euphemise the name of Voodoo’s popular “Cock-N-Balls” doughnut, resulting in what I can guarantee is the most exciting career day speech ever. In response, the school released a statement on Friday condemning the presenter’s “inappropriate language” and confirming that the doughnut dork and his vile weiner words won’t be coming back to cock-up another career day.

Speaking to a KGW reporter, a Voodoo representative reported that the employee was sorry, presumably still distraught and ashamed for ever saying aloud that disgusting word that no one, especially not 13-year-old boys, would ever use.